Back to all posts

Why Your Apology Doesn't Work: An Open Letter To H&M's CEO 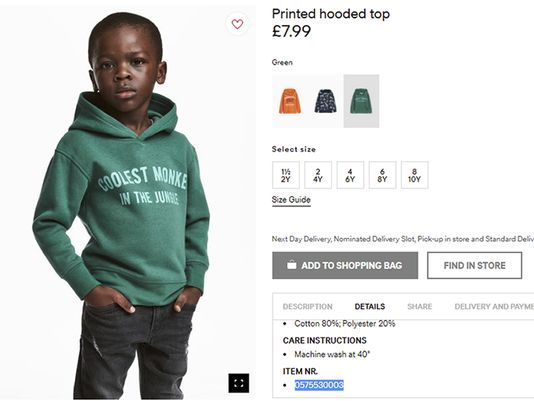 I hope this finds you well. My name is Gospel Igwe and I’m a 33 year old recording artist and motivational speaker from a small town in Oklahoma. I’ve spent the last 10 years living in Phoenix, Arizona which is where I first discovered H&M in a mall in Scottsdale. Since then it has been my top choice whenever I shop for clothing and accessories.

I was beyond appalled to learn about the children’s sweater that you offered on your website that contained the phrase “cutest monkey in the jungle” with an African American child on the front. Why and how this is wrong could fill an entire book (and there are several that have been written) but that is not my purpose. Instead of a tweet or post on Instagram, I decided to write you, the CEO, directly to tell you why your apology doesn’t work. I imagine realize in your position you might mostly be concerned with “big picture” issues, but I think you will agree that this incident is growing into a big picture issue that would require your wisdom and action. My hope is that you will hear my words from the perspective of someone who doesn’t look like you, nor shares your station of wealth and privilege in hopes that it would inspire you to at the very least be more informed about the ineffectiveness of your apology and at the very most take action to rectify this situation. Thank you for your patience as I make my best attempt to explain this from my perspective.

How We Got Here

Last week an image of a of a little black child modeling children’s sweater with the phrase “Cutiest Monkey In The Jungle” was posted to your site as a product for sale. This means that multiple departments and department heads (design, modeling, merchandising etc.) signed off on this before it went live on your site. Not one of them felt that this image was racist or inappropriate, or not one felt like there was an environment that would be conducive to them raising such a concern and I don’t know which is worse. In our current culture with the incredibly public racial blunders of Dove, and insensitivity of Pepsi, it seems that no one at the company in the departments tied to this going live said “hey, this doesn’t seem right.” The product went live, and discontent went viral capturing the attention of celebrities some of which terminated their partnerships with you.

Shortly after a statement was posted to the front page of your website acknowledging the incident, apologizing stating your position on racism & how it is not a part of your core values. It also stated you’ve heard the criticism and you agree with it. I found this to be perplexing and confusing causing me to ask the following questions:

If you agree with the criticism, then why was the product designed and why was a black boy chosen to model it?

In reference to your core values, doesn’t the fact that such an obviously racist image can go from development to live on your website show that it is in line with your core values?

Could it be that your core values are wrong or that you don’t attest to them as closely as you thought?

If your position is that racism is wrong, wouldn’t you want to turn the other way in a full out sprint at anything that could be contrived as racist in any way?

In light of these questions, your apology sounds more like “In light of all the backlash, We’re deeply sorry because of the bad press and damage this has done to the brand we’ve worked so hard to build.”

Why Your Apology Doesn’t Work

Your solution to this problem is an apology posted to your website, a warm reassuring reminder that racism is not a part of your company, and a promise of an “internal review” to ensure that this doesn’t happen again. Your apology didn’t work because it’s lacking tangible, practical steps on how you plan to ensure this doesn’t happen again. Without those steps, this just feels like the standard damage control, cut-and-paste PR bandage we apply and hope it sticks long enough for this to blow over. I hope you can see how that is a slap in the face to people of color who fight, strive, and give their lives to exist on the same plane as their white counterparts under the same title: human being.

I’ve never been the type of person to point out problems without also attempting to discuss solutions. The first one that comes to mind is terminating the department heads associated with signing off on this image being posted.

Cutting ties with these people illustrates that it’s unacceptable to have this type of lapse in judgment in positions where decisions most visibly reflect the core values of the brand. More importantly, terminating these individuals is futile if you don’t fill these positions with people of color (if I’m correct, there are no people of color on your board of directors).

Nothing ensures your core values being reflected than more people of color having a voice of authority at the table.

I think it’s dangerous to surround yourself with people that look and think like you and after this debacle, I would hope that you see the dangers as well. Our culture has recently grown to sharply frown on sexual assault with similar consequences, and if this product manager, department head, or board member was caught in scandal of that nature would you have a need for an “internal review” or would you cut ties and replace them with someone who understands your core values?

Should this be any different?

Moments like this are special because they can be defining and allow you to change course placing you on the path of who/what a company aspires to be. I really enjoy shopping at H&M, but I’m immensely conflicted because I can’t help but feel like your value of me as a person is on as deep as my investment to your company, as I’m likely not in your target demographic nor do likely I look like them. I thank you for your time reading this and hope that you will do whatever tangible action on behalf of people who don’t look like you.